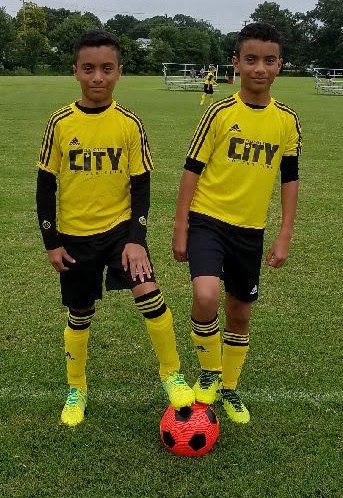 Twin brothers Jordin and Justin participated in the Ellicott City Soccer Club’s first season of Get On the Bus, and were two of 41 students in the program from Deep Run Elementary School in Elkridge, MD.  Selected for GOTB based on their achievements in the classroom and in the Deep Run community, Jordin and Justin benefitted from everything GOTB had to offer, from getting their homework done every day to becoming good teammates and healthy athletes.  They developed so much as soccer players in CiTY’s rec program through GOTB that at the end of the season, they tried out for CiTY travel soccer and were ultimately selected to play on a 2006 travel team.  Financial support of the CiTY community enabled the first season of GOTB, which led Jordin and Justin to their current path as club members and soccer players experiencing the sport on a competitive and life-changing level.  This opportunity has given Jordin and Justin access to professional coaching and the continued enforcement of the importance of being positive contributors to the community. Jordin and Justin now play on their high school team and continue to play on their club team with CiTY. We are proud to call Jordin and Justin GOTB alums. CiTY is proud to have Jordin and Justin in the club.