Helping More and More Kids Experience the Joys of Soccer

Helping More and More Kids Experience the Joys of Soccer

Tim Ryerson has put together a nice run working with and building youth soccer in the United States.

The Pleasanton resident and general manager of the Ballistic United Soccer Club also spent time in Maryland with the Ellicott City Soccer Club after graduating from the University of Maryland, Baltimore County. 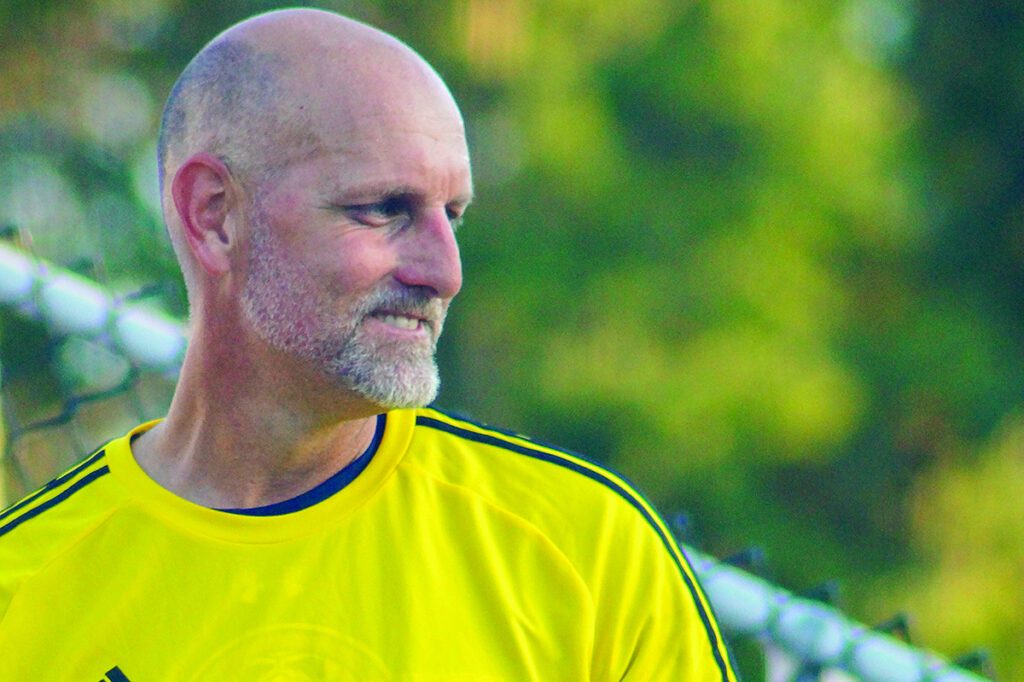 He was helping grow the game of soccer, providing incredible opportunities for the youth of today, and combining not just soccer skills but life lessons as well.

But there was something missing.

From this came the idea for “Get on the Bus,” whose premise is straightforward.

Kids at targeted schools apply and are selected based on need and merit to receive, completely free to them:

* Transportation by bus to and from the soccer field to participate in a recreational soccer program.

Once again, all this is free for the kids.

The entire movement got a boost four years ago when the United States did not qualify for the 2018 World Cup. At that point U.S. Soccer was looking for a way to innovate to grow the game — how to find kids the game of soccer was not reaching.

U.S. Soccer created grants for youth organizations to get more kids into the sport.

Out of it came the growth of GOTB.

Ryerson’s vision came to life initially on the East Coast.

This was on target with what Ryerson was doing with GOTB and Ellicott City became the inaugural GOTB chapter.

“We piloted this in Maryland,” Ryerson said. “And it is still funded by Ellicott City members, sponsors, and partners.” 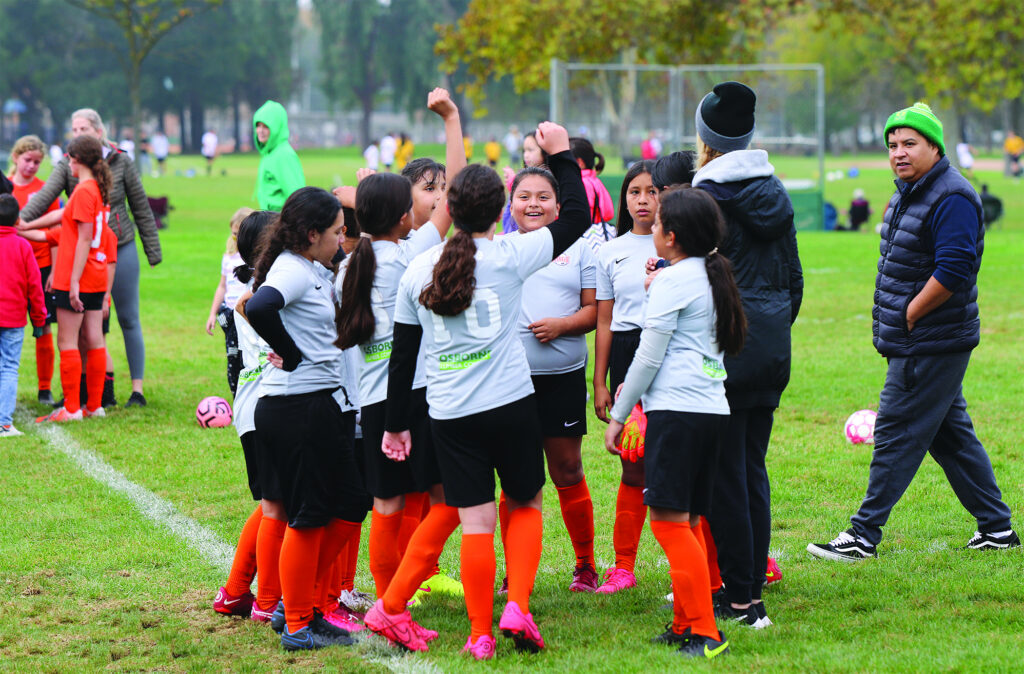 The Girls from the Pleasanton Rage/Get On The Bus team prepare for a game in the League America Festival. (Courtesy Cal North Youth Soccer)

With a solid pilot program successfully underway, it was next about getting grants from U.S. Soccer to launch the next one and spread the path for kids across the country to deserving youth.

What started as an idea from one club was about to blossom into an ever-growing movement to help children in need.

“Nevada was the first, then Northern California,” Ryerson said. “We now have nine across the country with six more planned.”

The main qualifier from U.S. Soccer was that the program had to be used at only Tier One schools. A Tier One school helps disadvantaged students meet state academic content and performance standards.

There happened to be one such school located on the campus of the University of Nevada, Las Vegas. Ryerson had played soccer for UNLV and his brother Rich was the head coach of the UNLV team at that time.

From there, with Ryerson involved in Ballistic, it was natural to find a Pleasanton school to become involved with GOTB. The lone Tier One school in Pleasanton is Valley View Elementary School. 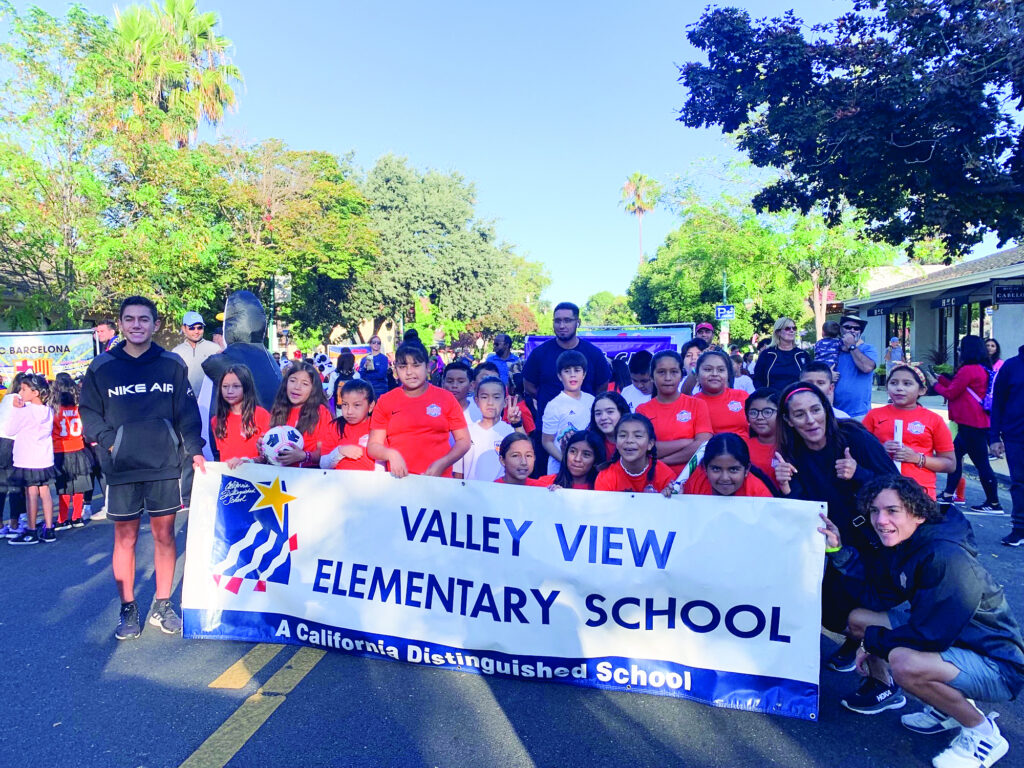 The boys and girls from the Valley View Get On The Bus program get ready to march in the Opening Day Soccer Parade on Main Street in Pleasanton. (Courtesy Cal North Youth Soccer)

“This was supposed to go live with Valley View in the fall of 2020,” Ryerson said. “Then COVID hit, and it got canceled.”

Ryerson, through his partnerships with California Youth Soccer Association-North, Ballistic United and the Pleasanton Rage, kept the plans together and it finally launched this August.

The school, the families, and the students at Valley View embraced the program immediately.

Spend one Wednesday afternoon at Valley View watching the program, and it’s easy to see the impact. The smile the kids have during all parts of the program shows the need for something like GOTB.

“The kids know their routine every Wednesday,” said Torre. “They get the discipline and self-esteem to be part of the program.”

In this inaugural season for Valley View, the groups were comprised of fourth and fifth graders that had no formal soccer experience.

The students are selected by the school to participate.

There are a boys’ team and a girls’ team, with coaches coming from both Ballistic and the Rage. They come to the multipurpose room after school where they spend time getting help on their homework, followed by life lessons and skills, and of course nutritious snacks.

Homework and life lessons come from Torre and other volunteers. Following their time inside, the two teams head to the field for soccer practice, meeting up with the certified coaches.

The joy and excitement of the kids is evident — there wasn’t one student that didn’t have a smile on their face. It was about having fun while getting the chance to play organized soccer.

On Saturdays they play in recreational leagues of the respective clubs, and even competed in a tournament in October at the Ken Mercer Sports Park in Pleasanton.

Because everything took place at Valley View, there was no need for a bus service, but Ryerson found an event for the kids to “get on the bus”.

“We did get a bus and take 52 people to an Oakland Roots game,” Ryerson said, of the United Soccer League (USL) Championship Division team. “It was like a big field trip.”

Initially it was to be a fall-only program at Valley View, but it went over so well, the program was extended.

“All of the kids will play in the Winter Rec league, and we will cover all of it as well,” Ryerson said.

Ryerson’s group has grown GOTB nationwide with grants for the program being secured from U.S. Soccer for schools in Nevada, California, Connecticut, Tennessee and Oregon, with Ryerson looking to secure more and continue to build.

There are nine chapters right now, with six more, including Sacramento, Los Angeles and more in the Central Valley on the horizon.

As far as Pleasanton is concerned, Ryerson, BUSC and Rage want to expand to other schools in town, but with Valley View as the lone Tier One school, there will be no grants from U.S. Soccer. 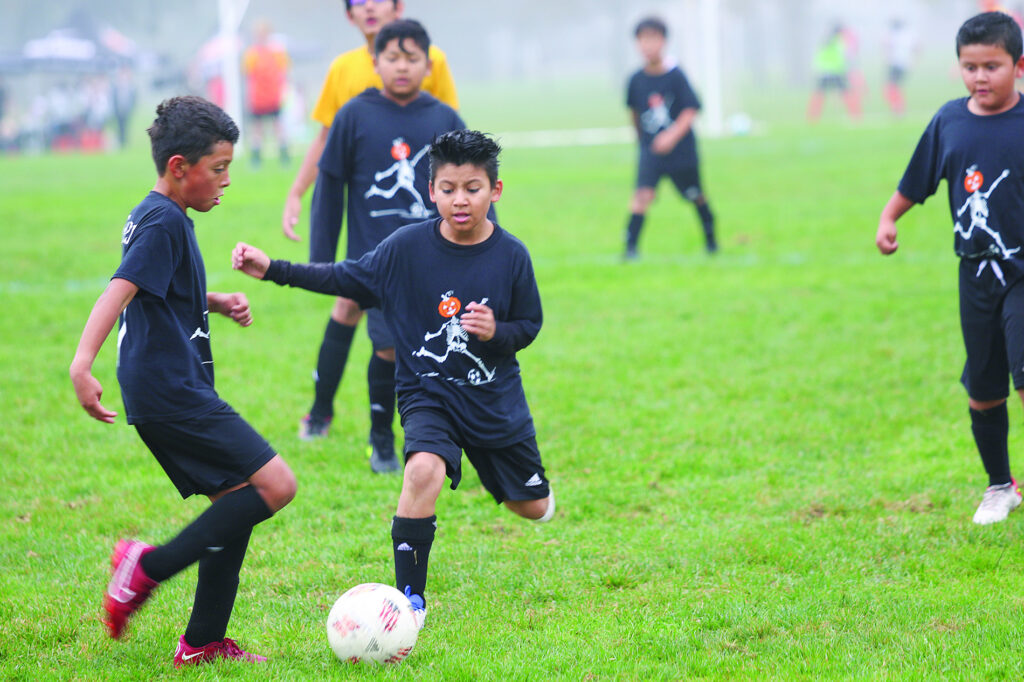 Boys from the Valley View Get On The Bus program competed for Ballistic United in the 2022 USYS League America Festival in Pleasanton. (Courtesy of Cal North Youth Soccer)

Still, there remains a need.

“Everyone thinks Pleasanton is a town where people can afford anything,” Ryerson said. “But there are a lot of students and schools that could use the help.”

Which is why Ryerson and the GOTB program along with local partners like Ballistic and Pleasanton Rage are set on raising funds so more disadvantaged students in Pleasanton can be helped and given more of a chance to succeed.

It’s that helpful of a program.

There are a couple of other elementary schools targeted and perhaps one middle school. That leaves the two local youth soccer clubs to raise the funds for the much needed programs.

“The plan would be to get the kids that need this from other schools involved,” Ryerson said. “We would be able to pick them up from their schools and bus them to Valley View and back.”

Ballistic United board president Scott McMillin has been a proponent for getting new kids exposed to the program.

“We are working on raising the funds so other schools can participate,” McMillin said. “We want everyone to be able to play if they want to play, regardless of (skill) level or age.”

But it’s more than just donations the group needs.

“There are other ways to get involved, like even dropping off the snacks after school,” Ryerson said. “There is always something you can do to help.” 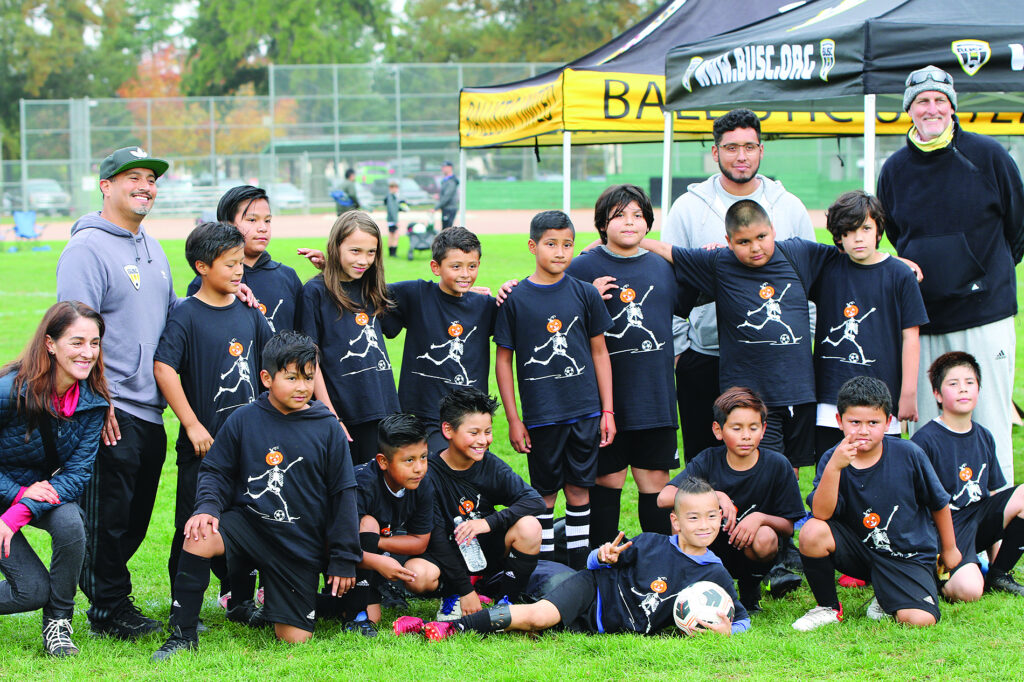 The Ballistic United/Get On The Bus team poses for a team photo before a game in the League America Festival. (Courtesy of Cal North Youth Soccer)